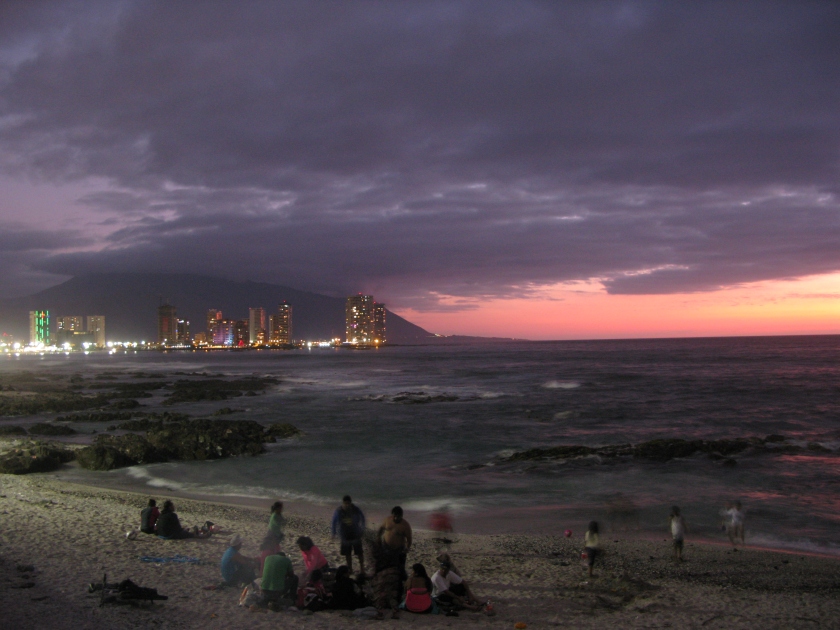 It is a sad and bewildering bus journey that takes me away from Bolivia and on to the Chilean coast. I say an early morning goodbye to Adam who flies home that day and board my 5.30am bus bound for Arica – a surfing town in the north of Chile. Exhausted and rather deflated by Adam’s departure I sleep my way through most of the early part of the journey, waking to find stunning volcanoes stark on the landscape as we reach the border.

My Spanish receives a severe knock here as I hear the Chilean accent for the first time and regress back to my Mexico self, shaking my head and saying no intiendo after most exchanges. This makes the border crossing – stressful as they can be anyway – all the more bemusing, especially as Chile is extremely strict with what goes into the country. All our bags have to be scanned.

The guy on the seat next to me is far too chatty for my contemplative mood and his accent especially indecipherable. I resort to ignoring him, smiling and staring out the window for long stretches. We watch Inside Out and Teenage Mutant Ninja Turtles in Spanish in a sort of companionable silence – me enjoying the former, he the latter. 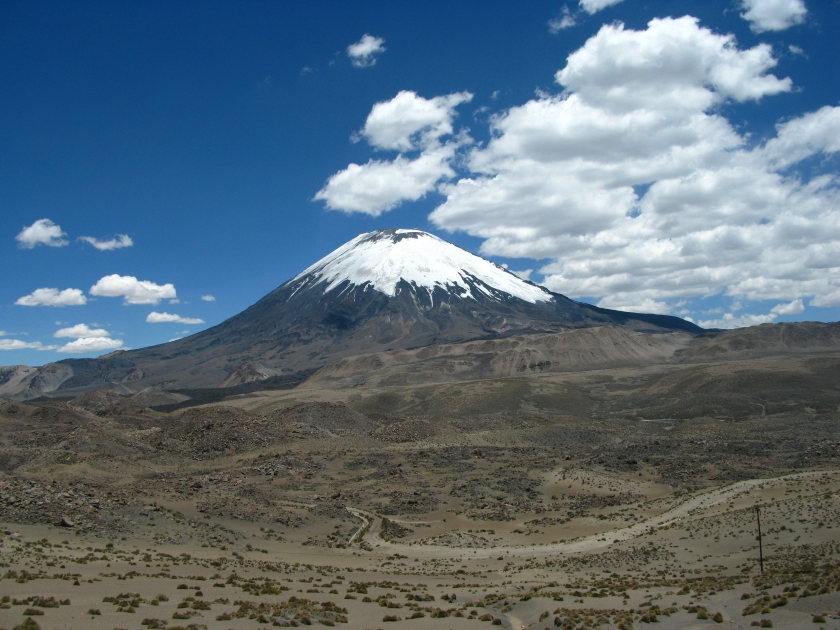 At Arica he makes to come with me and I have to ignore him some more and spend a painfully long time changing money before he thankfully walks away. His intentions were probably good, I think as he waves a confused goodbye. I just didn’t have the energy to work out what they were.

I have a small breakdown at the bus terminal. After one taxi driver ignores me, I crumple on to my bags and cry into my hands. The day has been long and frustrating. Several people stop to ask if I’m okay but I can’t do much but sit and shake with wearied sobs. But after it passes I pull myself together and get myself to the hostel.

I’m staying just for a few nights here, hosted by a very sweet and extremely flamboyant hostel owner. I continue my breakdown shortly after arriving with a tearful call to my mum, dad and grandma, who seem to be assembled for my council. I’m not sure what it was, but after Adam’s visit travelling began gradually to lose its appeal as I looked forward ever more incessantly to building a new life with him in London. What I faced at this point was the question, should I take my earlier flight?

When extending my trip I’d booked a new flight in February, but the December flight still remained, tantalising. And now, February seemed an eternity away. I decided to sleep on the decision. I didn’t know I’d be grappling with it until that flight actually left.

A walk to the supermarket and back, with one long and accidental diversion, provided the exertion to take me out of my sadness. With food and Chilean money, and later, sleep, I awoke refreshed and ready to explore Arica in the one day I had there.

I find the city rather uninspiring in itself, gritty as it is, the sea vista marred somewhat by the docks lining the coastline, high dry sand mountains behind it. But I happen straightaway upon a huge market on a central street and enjoy absorbing this for an hour or so. I’m on a mission to find a Chilean adaptor, as for some reason they have an entirely different plug to the rest of South America. After a few electric shops fail me, I find one extremely cheaply in this very same market after happening on it again.

Listening to podcasts, I spend the rest of the day walking, my camera in hand. I hike up to the cliff overlooking the city. I find the nearest beach to the town, about 5km out, and walk barefoot on the wet sand, the sea lapping over my feet. I seem to have rediscovered the travelling fever, which all but abandoned me the previous day.

The following morning I leave for Iquique – another surfing town about four hours south, where I plan to spend the next week and a half, devoting myself to creative writing and the beach.

It was a bit of a risk choosing a place I had little knowledge of to spend such a stretch of self-imposed writing exile. I do always seem to gravitate towards surfing towns. I spent a month in Byron Bay, Australia, a week in Tarifa in the south of Spain and I guess we can add California to that list now too – but I’ve never surfed or had any inclination to do so. Perhaps it’s the atmosphere which always pervades such places that I’m drawn to. Or my fondness of windy places. And luckily, when it came to Iquique, the gamble paid off. This peaceful, pretty town with its old-world single-storey buildings reminiscent of a Western film set, its intimidating backdrop of vast sand-mountains, it’s beautiful beach and one of the best hostels I’ve stayed in on this trip far surpassed the few expectations Lonely Planet had provided.

I spent a blissful few weeks relishing in the lifestyle of a writer, one I’d had my first taste of back in Berkeley – and the way I now want to spend every passing day. I’d wake early to run on the beach, sit cross-legged meditating by the waves and feel my hands bury themselves deep into the sand with each morning sun prayer. I would then write for four hours straight, allowing myself brief tea breaks where I would stare intently into the boiling kettle. Afternoons were for long walks by the sea, or swimming and sunbathing and reading Hemmingway.

As much as I tried to stick to this rigid daily itinerary, which naturally encourages reclusive behaviour, my persistent and engaging fellow hostel guests led me also into diversions, strange philosophical conversations, bottles of wine and card games.

In my time by the beach I met a lot of great people and wrote three passable chapters of my novel. But most importantly, I tested out what my life could be like if I devoted my time to writing. And in Iquique it turns out, it would be pretty perfect.