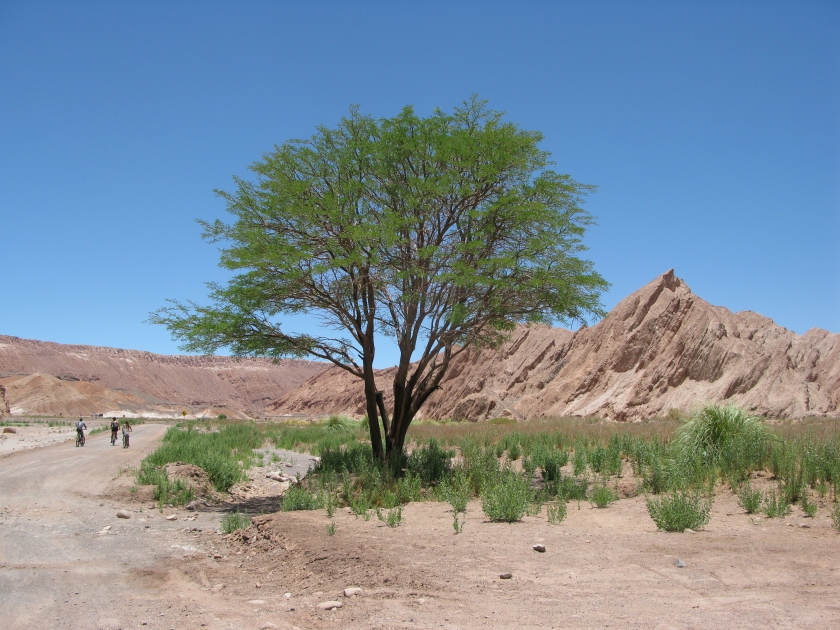 Another long bus journey takes me to my next destination in Chile. I’ve vowed not to take another night bus on this trip if I can help it, after some of the more horrific journeys of Bolivia. So I idle the day looking out on to the passing barren landscape in a mild stupor, audiobook in my ears. I’m interrupted only when we cross into a new region of Chile where our bags have to be scanned. It’s at this point I discover the oil and vinegar I was ill-advisedly transporting – in a stubbornness not to waste such expensive items – have exploded odorously into the side-pocket of my bag, making the bus and the rest of my day smell like a heavily dressed salad.

On this journey I also feel the full absurdity of the detour which had led me back to La Paz and not across the Chilean border after the salt flat tour. For San Pedro de Atacama – the mid-desert backpacker hub where I’m heading – is exactly where I would’ve finished the Uyuni tour if I’d chosen to go that way. This would’ve meant abandoning Adam though, and missing my enjoyable weeks by the sea in Iquique.

I arrive as the sun sets on the dusty town, finding my hostel strangely abandoned and unwelcoming. Unable to find a staff member, I cook, sad for the lack of balsamic vinegar, which I had to give up after the incident along the way. It’s dark when I walk to the town in search of water and a sense of the place. It’s a small town, but friendly and with a lively main street home to many restaurants and bars packed with people.

The following day I’m reunited both with Shing and Caroline – the first very briefly as she’s heading further south later that day and the second for, as it turns out, the next few weeks. Since I saw her in Sucre, Caroline has been learning Spanish and hanging around with new partner in crime Nikki – who I meet in San Pedro. The two tell me about some of their misadventures, including being thrown out of the hostel in Sucre for mild acts of vandalism and stripping off on the salt flats. I immediately like her.

Our original plan is to stay in the desert for a few days and then head to the coast, Nikki then heading back north for her flight home from La Paz and Caroline and I set south for Santiago. But we hear such negative reports of the only logical mid-point coastal town – Antofagasta – and enjoy roaming the dusty streets of Atacama so much that we end up staying nearly a week. I move out of my peculiar hostel and in with the girls. We find a market with real vegetables and spend the days cooking, drinking wine and browsing the cafes of the square. I try to keep up the productivity of the last few weeks by writing for a few hours every day. The days are warm and bright and blue skied. 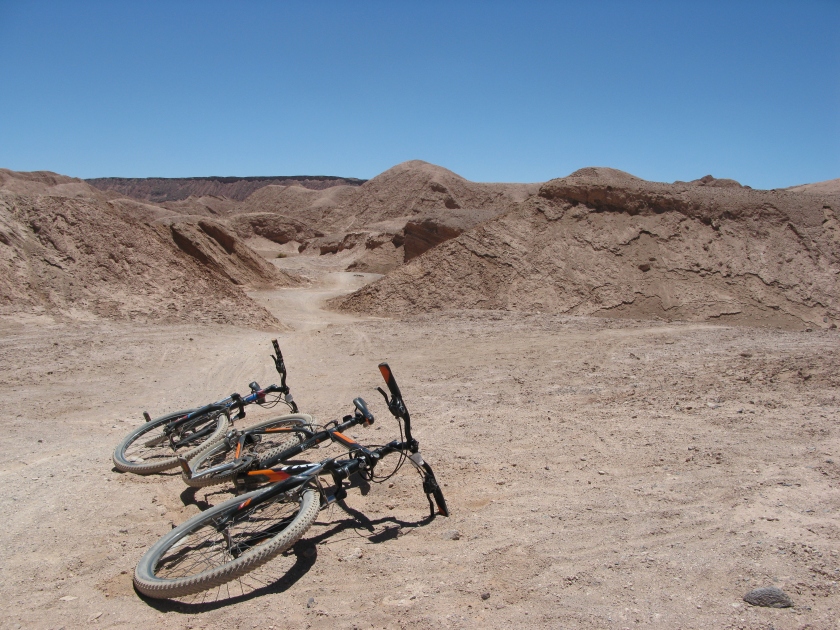 One day we rent bikes from the hostel and cycle to a local canyon, finding ourselves quickly in the middle of the desert. We pick up a lovely Scot on the way who we meet rather lost on his own bike and navigate the rest of the way together. He’s a fascinating guy, taking a few weeks’ holiday before going to work on a ship for a few months conducting what sound like very interesting environmental studies, however much he tries to be modest about them. We also discovered he spent much of his younger years living in a caravan touring the UK.

The canyon seems endless. We cycle up and up, the high cliffs each side, stopping only to ease our bikes up over ledges or through narrow openings. The sun beats hot on my back and I’m grateful when the path dips into the shade of shallow caves, the cliff tapering above. I start to lag a little, the route seeming endless and the slight incline telling on my reduced fitness level. True to my experience so far of bikes in this part of the world, I lose control and fall after hitting a patch of particularly deep sand, the friction slowing my tyres and throwing me off balance. My bloodied knee affords me a break in the shade and an apple. 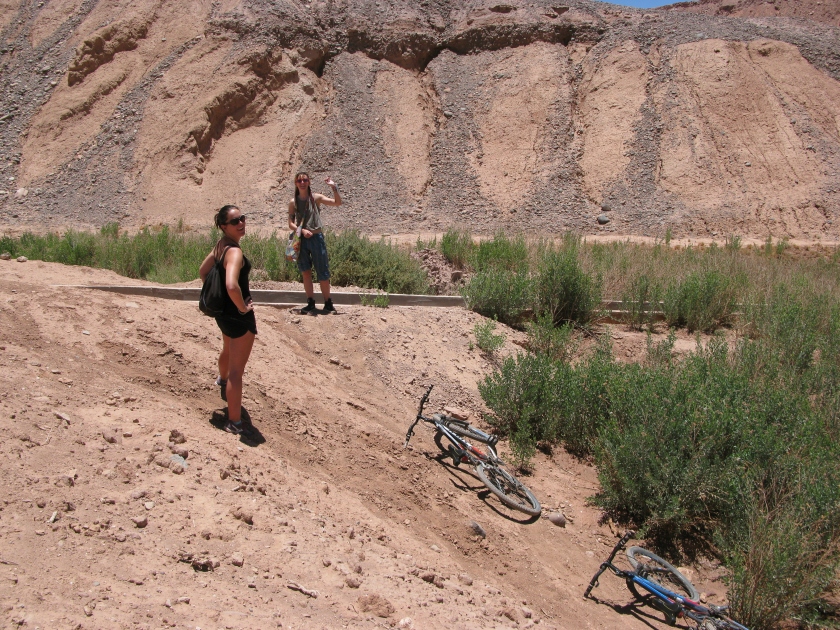 The ride back is far easier, speeding downhill along the labyrinthine canyon’s passage and out into open space once again. We reward ourselves with beer, or in my case a diet coke, in the centre of town, hearing more of our new friend’s stories.

Meanwhile, in London, my parents have been getting rid of one of our sofas. Adam, new in his flat, is my suggestion for someone to take it off their hands. It’s as we sit in the bar I get a text from him to say he spent the evening visiting my house to pick it up. The idea of him and my parents spending time together and no doubt negotiating the move of the sofa in a comical fashion between the two houses is too much to bear and I burst into tears at the table. The 16th of December flight still waits tantalising from Sao Paulo in just a week’s time, still possible to board should I wish to. Nikki tells me to take it. Caroline tells me not to. I sleep on it.

Later on, after a fair amount of cheap and rather excellent Chilean wine, we have a night out in the local pizza restaurant, the liveliest place we can find in town. We invite a couple of Brazilian and Israeli guys from our hostel, who are all incredibly sweet – and Caroline and Nikki end up hooking up with the Israelis that night. I also have a very long conversation in Spanish that evening with one of the guys in our hostel, where I even explain my horrible year in London, relationships and lost friends and mortgages and all. In the morning I’m a bit baffled as to how I managed this. I still am. 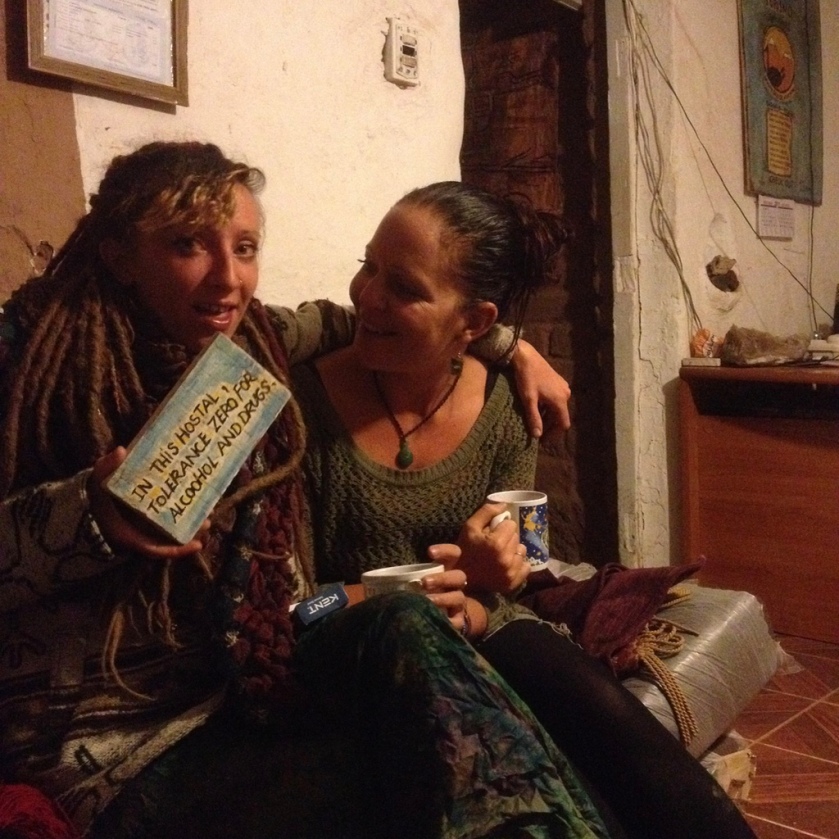 On our final night we all go to see the stars – another popular activity of the desert. Without light pollution, Atacama is one of the best places for star gazing in the world. My friends cause an amusing commotion, bringing wine with them and being taken to one side before we leave to be asked if they’re too drunk to go on the excursion, where ‘kids are present.’ These strict ideas seem worlds away from the disarray of Bolivia. Why can’t you drink a glass of wine under the starlight? What makes the situation even more confusing is we’re actually given wine during the night.

We’re driven out to a house in the middle of nowhere and sit wrapped in blankets in its garden, plied with hot chocolate and enthralled by the spectacular sky above. With a laser, our host shows us all of the visible constellations, oddly reversed from UK skies as we’re in the Southern Hemisphere. In a rather pensive mood after getting a bit of worrying news from home, I lie back and count the shooting stars. I see about 25, and wish on every one.

We all part ways the next day, Caroline and I for Valparaiso, a coastal city not far from Santiago, and the Israelis for the north of Chile. Nikki plans to stay a few more days before heading back into Bolivia. It’s a sad parting, despite the short time I’ve known the others, and for Caroline – who describes Nikki as her ‘soul sister’ – even more so. She cries as we pull away from the bus station and wave goodbye to the desert, a 24-hour bus journey ahead of us as we travel further south.