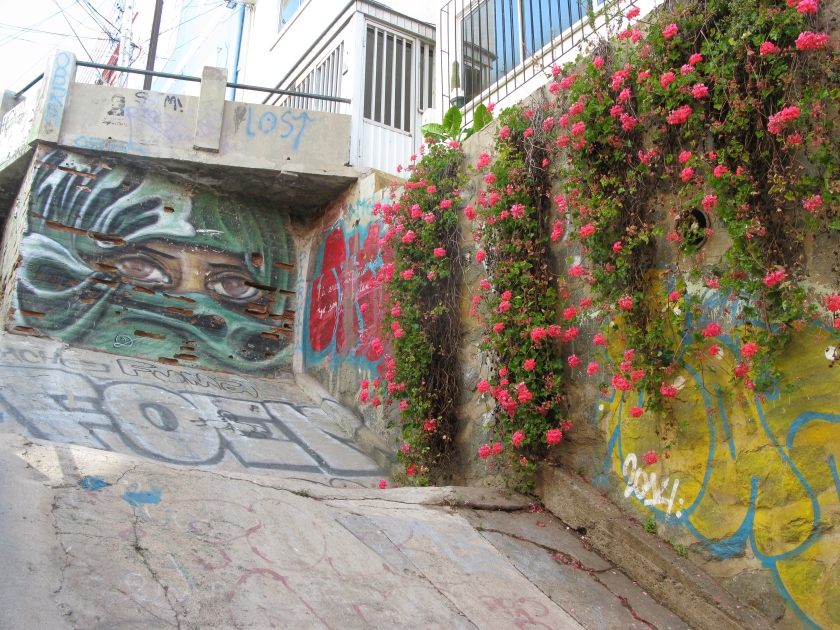 It’s the 16th of December. I’ve just spent two straight days on a bus, listening to almost all of Dracula, unabridged. If I leave now and catch a flight from Santiago to Brazil I could be on my original flight and back in London tomorrow. We’ve just arrived at our hostel in Valparaíso, the city by the sea. The flight’s still cheap on Skyscanner. I can actually do this. I get as far as the checkout screen for the airline but something stops me. I close my browser. I’m not ready to go home. I smile for the conviction and go to tell Caroline.

Valparaíso has long been reported to me as a favourite place by many travellers going in the opposite direction – not only in Chile, but in some people’s whole itineraries. I’ve already been shown pictures of it, accompanied by awed and enthusiastic commentary. And as we walk into town that first day, I’m not surprised. It’s immediately my favourite too.

The city is made up of 42 cerros (hills) giving necessity for the twisting staircases, steep alleyways, short funicular railways, jutting cliffs and sudden views of the wide bay that give the place such character. A favourite stopping place for those sailing to California at the time of the Gold Rush, before the opening of the Panama Canal, it has a rich colonial history, with the influences and architecture of many European countries still stark. I even find a Merry Hill. 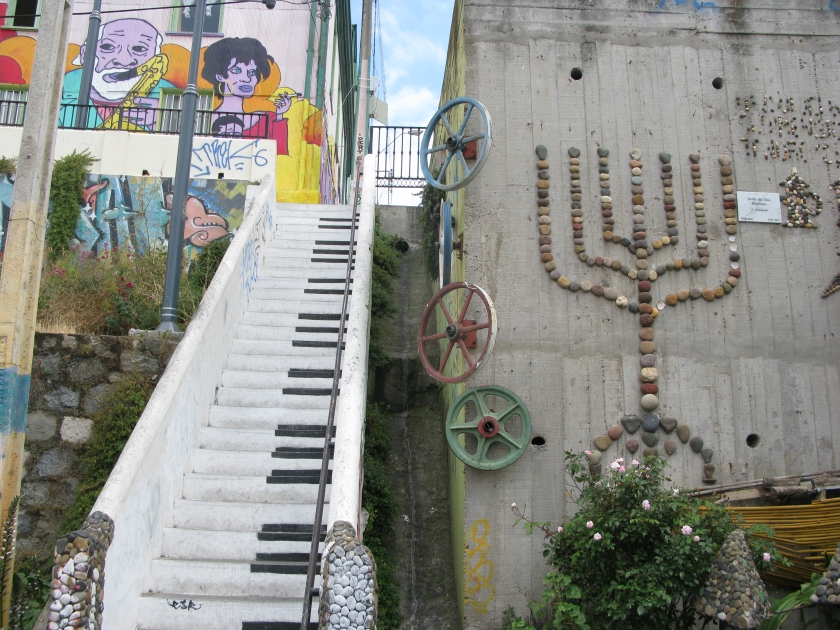 But the place is also vulnerable to fires, and many of the ancient, grandiose buildings are decrepit or in disrepair as a result. Add to this a thick layer of street art on basically every surface – wall, doorway, stairway, exposed concrete – and the result is a grubby, gloriously urban paradise, a grotty 3D canvas to wander through entranced. In fact, this is how it gets its name, paradiso meaning paradise in Spanish, val thought to be a slight mishearing of van (they go), as people overheard, “they are going to paradise.”

I learn the majority of this on a free walking tour on my second day, accompanied by Caroline and our two new hostel roommates, who we’ve bonded with already over an early-morning encounter with an industrious rat in one of the walls of our room. Laurel is from Seattle, Carlos from Costa Rica. The tour is great and hugely informative, including a concert with a resident busker, free alfajores – a sort of Chilean biscuit – from a local baker, and an audience with an A-list street artist – all friends of our guide, who seems to know everyone.

Side-stepping the plans of the others to continue exploring, I walk back to the hostel, feeling tired from the tour and wanting to be alone. That flight home’s still on my mind. The two long months that remain of my trip stretch out before me, a yawning chasm of time separating me from home. I spend a little while on Skype and after a lengthy conversation decide to change my flight once again so I can return in a month’s time. This is actually not too difficult or expensive to orchestrate, and the decision gives me a great deal of satisfaction, balm to my homesickness. I wander around for the next few hours with a huge smile on my face.

Despite my new resolve to be at home sooner, I spent the rest of my time in Valparaiso working out how I could move there. I take an afternoon to walk along the city’s highest road and fill my camera with pictures of endless, astonishing street art. The high wind rushing up from the sea eases the heat of the sun. I look out to the horizon and watch a huge ship pull out into the water and grow smaller as the clouds move over the day. I walk all the way to Chilean poet and politician Pablo Neruda’s house, a significant city landmark and beautiful building. I even stumble upon a few Christmas markets selling tacky decorations and mini snowmen, strangely out of place on the hot day. 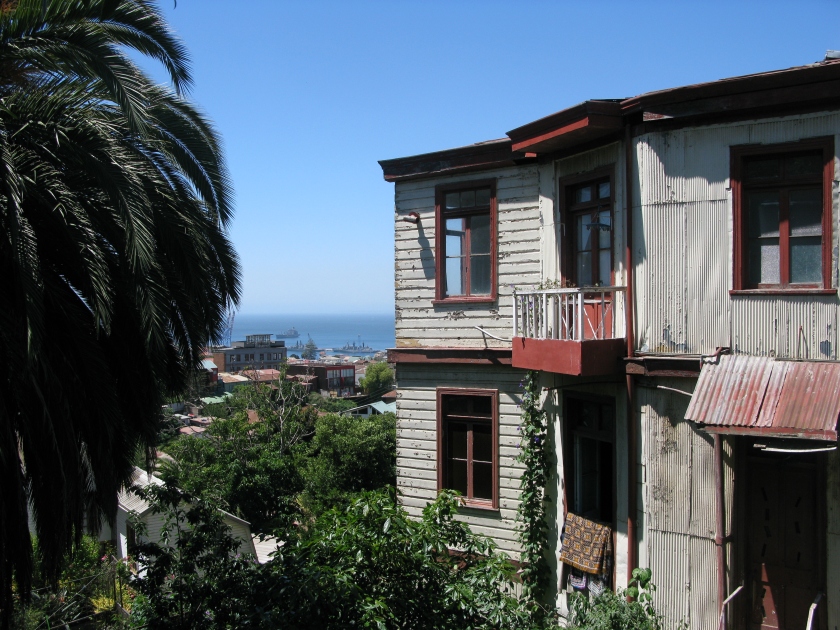 On our last night we buy large bottles of cheap Chilean wine. Carlos, before having to leave, serenades us all with his guitar and I promise to catch him in Patagonia. Equipped with more wine, we lead the majority of the hostel into an increasingly raucous game of ‘Would You Rather?’ I remember few specific examples, except – to give you a general idea – would you rather bite off your mother’s right thumb or kill one of your pets?

Not without a small pain pressing behind my eyes the next morning, Laurel, Caroline and I pack up, finding a bus for the short three hour journey to Santiago, sad to say goodbye to that beautiful spot.

It’s been a while since I’ve been in what I would term a ‘proper’ city. And by this definition I suppose I mean a city similar to London, with vastness and bustle and an underground system. La Paz was too bewildering and beyond my scope of normality to qualify. Medellin certainly had some of the aspects. But it was probably as far back as San Francisco or LA that the criteria for this specific kind of city were met. I always say when I’m travelling – it’s strange what you miss. And this was it: Santiago, thronged with people, filled with their chatter and the music of street performers. I felt myself relax immediately as I soaked in the familiar, longed-for energy of a big city.

We’re only here for a few days, Caroline and I both due to fly on Saturday, her back home to New Zealand and me further south into Chilean Patagonia. We’re staying at the Insolent Princess Hostel, which we choose almost entirely for its excellent name. We spend most of the time walking around, tracking down some of the city’s best markets, Caroline keen to stock up on souvenirs and last-minute Christmas presents.

We also indulge another Chilean tradition here by tasting the sickly, high-strength cocktail known as a terremoto – an earthquake. We meet a group of Brazilians in our hostel on our final night in the city, sharing several jugs of this between us, those after the first known as replicas – aftershocks. The world does certainly seem to quake a little around me after having many large glasses of the stuff. I wander upstairs at one point, leaving all my things – including most of my valuables – on the table where I was sitting. I wake up a few hours later in bed, fully clothed, and wander a little bewildered back down to the now silent bar. None of my belongings remain. Caroline laughs at me the following morning when returning everything to me. “You just disappeared!” she says. 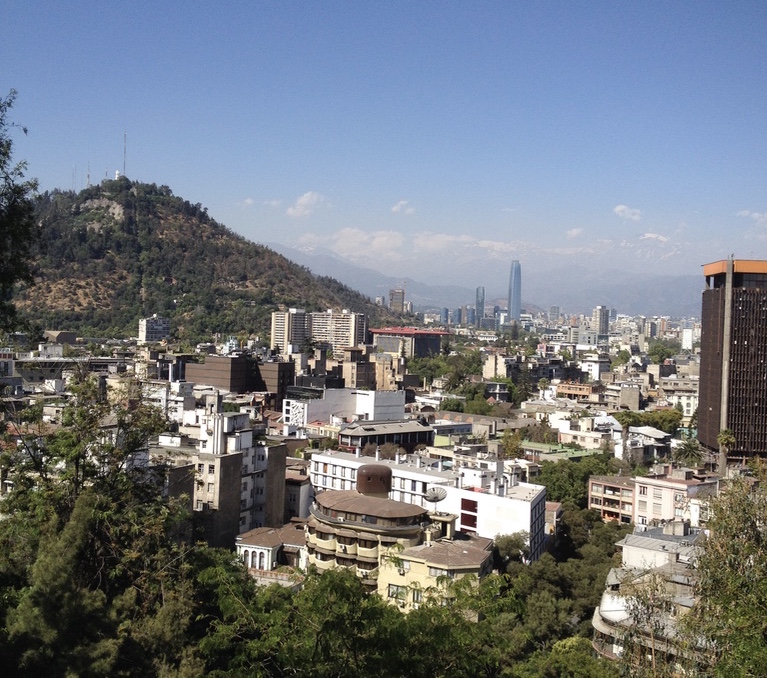 We find a final market that morning, before Caroline and I part ways for the final time, in what’s a particularly emotional goodbye. I’m a little teary-eyed as I wander to the metro station. But, I reassure myself, we’ll see each other again. In Mongolia, perhaps.

My final afternoon in Santiago is spent wandering through the enthralling Museum of Memory and Human Rights, detailing the long and cruel dictatorship that took over the country between 1973 and 1999 and its many victims.

My head full of the history I’ve just absorbed, I head back to the hostel and on to the airport, waving Laurel goodbye too. It’s time for another change. I’m set for the southernmost regions of the continent, for mountains, glaciers, ravished landscapes and a temperature drop of at least 15 degrees. And Christmas, of course.