What little time we have left in Guatemala we spend in Antigua, a town further south and convenient for the airport, mainly working in the numerous quaint cafés of its touristy square. The city, reminiscent in many ways of San Cristobal in Mexico, sits in the shadow of a volcano which rises symmetrically and dizzyingly above us. Even after two days it’s still captivating as I sit on the roof of our hostel, staring at the mists that lap around it’s far summit, my laptop sleeping beneath my slack fingers. A little later that evening, a neighbouring volcano erupts, spilling lava into the night to dribble down its banks and paint red streaks in our horizon – the country’s parting gift. 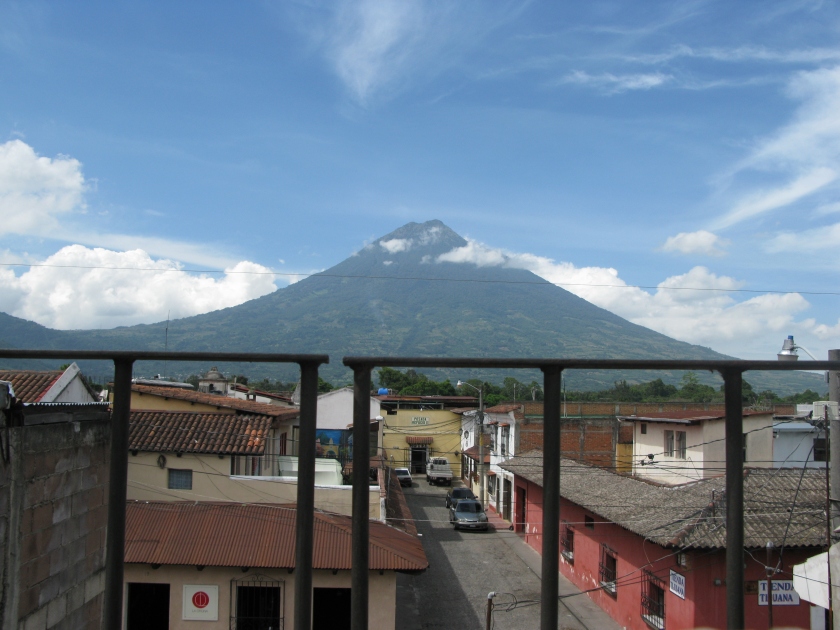 The journey to Guatemala City airport is relatively painless and hassle free considering the notoriety of the capital, its reputation for danger the very reason we stayed in Antigua to begin with.

Through security now and closeted in the safe vacuum of air transit, my focus turns to our next and in many ways opposite destination – Miami. We’re in the city for a five-day stop-over, necessitated by the cheap flights that connect it to Haiti and elongated by my curiosity to see the place.

As the plane begins its descent, I look out over miles of murky swampland which I later discover to be the Everglades and am suddenly struck by my complete lack of knowledge about the area. Searching around for reference points, my brain provides only a series of images from Dexter’s murder scenes and my many hours stealing cars and driving them into pedestrians on GTA. Not a great starting point. I turn to Elliot and ask, ‘where on earth have we come to?’

Even though we’d prepared ourselves for a culture shock, the reality is staggering. The humidity assaults us as we leave the airport, the air viscous and an unwelcome change from the fresh mountain climates we’ve been used to. The buildings we speed beneath in our taxi are towering, clean glass monsters, not a square of peeling concrete, cracks or structural flaws. The passing cars are immaculate, number-plate free and each worth more than a small flat in East London, no dilapidated chicken buses and fraying vans weaving their way noisily between the lanes. Our hostel is square, plastic and inhabited almost exclusively by hungover, shirtless holiday makers who sit in silence on their smartphones, no missing tiles, fairy-lights or backpackers learning Spanish.

And then there’s the beach. Miles of white sands, the water warm and welcoming. We walk there from our hostel as the sun sets, and the sight is so enticing that despite lack of swimwear we climb into the sea and feel the residue of our day of stress and travel wash away in the water.

We’ve acquired a new companion, Elliott’s university lab partner Emma who’s flown across for the week from home town Austin. I’m an immediate fan. On my request, she’s brought me an enormous box of Twinings Earl Grey and I’ve never felt more British as I make my first cup in the communal kitchen. This is no easy feat, our hostel so ill-equipped that I have to microwave the water in a plastic bowl. It’s worth it though. There are things you don’t realise you’ve been missing until you experience them again. Normal tea is impossible to find in Central America.

That first night, after impromptu swimming and tea tasting, we sign up for the hostel night out. This is almost unavoidable here – the hostel’s strapline is ‘we don’t just check you in, we take you out!’ – and they’re true to their word, organising a night of drink deals, bar crawling and clubbing every single night of the week. The exhausted looking staff pitch these evenings of entertainment to the room every afternoon, their voices growing increasingly hoarse and the nights ever more outlandish as the week progresses. The advertised highlights of one night, which we choose to avoid, include performing dwarves, injection shots and scantily clad dancers.

That first night out is a straight bar crawl, with an hour’s free drinks at the hostel before moving on into town. But what makes it memorable is the party bus that takes us from place to place, packed with people standing on different levels, music, disco lights and the windows blacked out. Slightly tipsy, the journey is mad and disorientating, and we spend it falling into strangers as we turn corners, singing along loudly and tunelessly to the blaring chart songs.

This night, which progresses to find me alone in a club attempting to speak Spanish to randomers and ends in the sea, sets a sort of precedent for the rest of the week. We wake late to spend the days on the beach, too hot to venture elsewhere, too relaxed and apathetic to explore further into Miami. This is followed by our free evening meal at the hostel, multiple cups of earl grey and an inevitable night out.

We discover citibikes and spend one early evening riding along the beach front and one day riding across the bridge into the city, which is much further away than it appears. I take a bus home.

Overall, my impression of Miami is not overwhelmingly positive. Someone asks if I’d ever live here, and I have to answer in the negative. It was a great five days and a lovely place for a beach holiday, but I don’t know if I could face being around the show of so much reckless wealth all the time. Or the sad state of inequality this necessitates, which sees a high number of homeless people roaming the streets and beaches. Although, as Elliott pointed out, there are worse places to be homeless.

After dipping a toe back into reassuring Western waters I’m just about ready to head back into the developing world. Although the next hurdle might be just a little more extreme.