I have a very vivid memory of my first conversation about politics. I must have been pretty young, as me and my brother were in our old house in Kilburn and still sleeping in bunk beds. It must have been around a significant election – probably 1997 – and he spoke to me into the forbidden hours after bedtime about the whole concept of government, the different parties and why it was an important day for the country. I don’t think my parents would have overheard this midnight lesson, as I’ve since discovered they were absorbed in celebrating the glorious culling of a much hated Tory cabinet.

My interest in politics didn’t grow much beyond this basic understanding until I reached sixteen and my A Level in the subject. Even this was very much about learning the systems, the history and the processes of politics. We rarely looked at current issues or held debates where our views could be encouraged and examined. It was only university that helped me to think in a more independent way, and only my first job among an extremely opinionated campaigns team that fired up my passion and interest in this area of work. Without a doubt, campaigning has since become my favourite part of my job and my greatest current ambition.

In light of this rather slow political education, you can imagine my amazement during a class I attended on my latest project visit. A group of eight-year-olds are being asked to invent their own political parties and come up with proposals for the upcoming Guatemalan election. They are told to stand at the front and present their policies – but the teacher doesn’t make it easy. He challenges them to justify their opinions and delves deeply into the subjects discussed. All of the issues are current and directly relevant to these children, concerning the city around us and the problems they face in their daily lives. They’re probably about the same age I was when I asked my brother about the government on that historic election night. 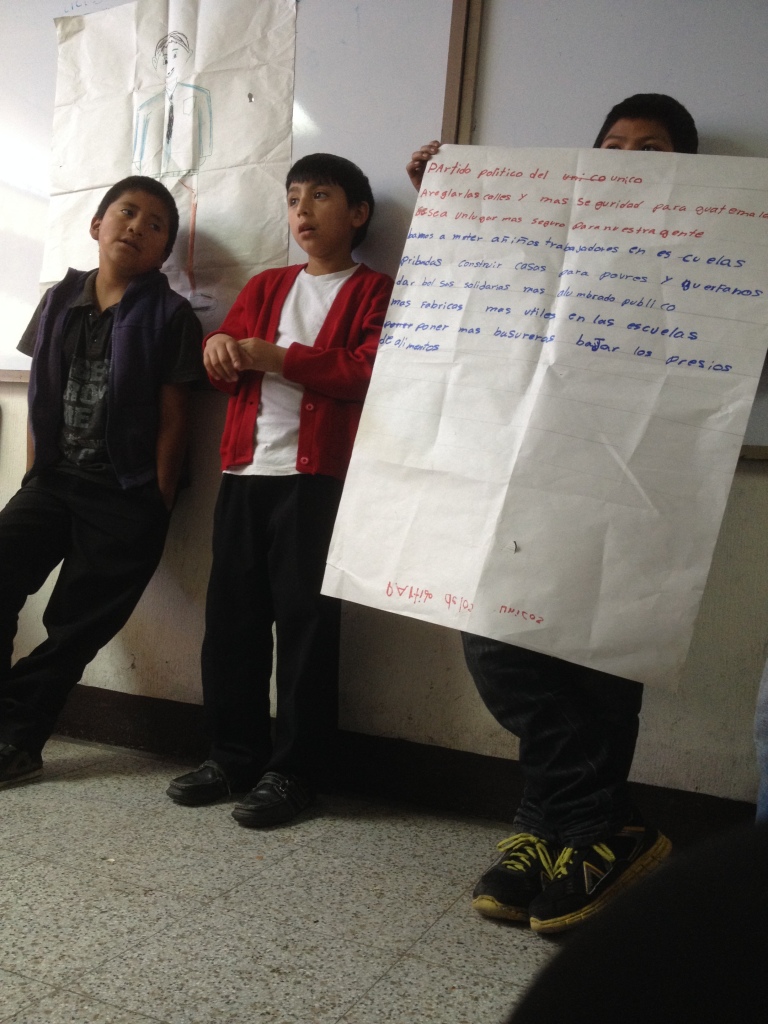 This week we’re in Quetzaltenango visiting CEIPA, an organisation which provides education and training for child and adult street labourers in the city. They have either aged out of school or can’t attend formal education because they need to work during school hours to support themselves and their families. CEIPA also do a lot of advocacy work, helping these children recognise and fight for their rights, much like Melel Xojobal, our previous project in Mexico.

“We like to take a different approach to education here,” says Linda, our contact at CEIPA and one of the founding members of the organisation. “We don’t want these children to learn only how to memorise facts, as the schools teach them to. We want them to be able to think for themselves and be able to speak out about the problems around them.”

And this isn’t my only politics class – I’m also lucky enough to see a group of teenagers present their ideas for improvements for the different municipalities of the city. This workshop is the beginning of a piece of work drawing together proposals to be presented to each of the election candidates. It’s truly inspirational to watch them present to the crowded room, where more than forty people stand, sit and sprawl, listening.

I’ve never yet been able to muster up the courage for public speaking, and even now I would have crumbled in front of this audience. But these kids are enthusiastic, confident and engaging, encouraged as they have been to think and speak for themselves from an early age. It would be difficult to find one teenager, let alone a whole roomful, this confident and enthusiastic about political issues when I was at school.

“Why are we so apathetic in the UK? Is it because the problems aren’t as obvious, as life-changing?” I ask Elliott as we make our way back to our hostel through the noisy, smoky roads. He shrugs.

Yes I do think this is one of the reasons UK teens don’t appear to be as interested or engaged in politics as CEIPA’s students. Poverty isn’t as apparent, and an election may not mean the possibility of having clean running water, or streetlights to help you feel safe in your neighbourhood after dark.

But perhaps if we were encouraged to examine the issues that are real and apparent in the UK, think for ourselves from a younger age and get used to presenting, even when two strangers from overseas are in the room, maybe we’d be a little less apathetic. Maybe the voting numbers among the 18-25s would climb higher than 60%. Maybe I’d be running for the Labour leadership this month.

Through their inspiring programmes, CEIPA have definitely mastered something that our education system in the UK is still yet to crack, and it was a privilege to see these young people’s fantastic input into the upcoming election. I have a lot of faith that with CEIPA’s help, this generation are on their way to building a better future for street labourers in Guatemala.

>> Find out more about CEIPA and their work